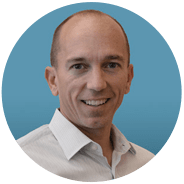 Sean Foote has been a venture capitalist investing in early-stage companies since 1998, most recently as co-founder and Managing Director of Transform Capital. He advises corporations and sits on investment committees of Corporate Venture Capital businesses.

His prior early stage technology venture firms, Labrador Ventures and Co=Creation=Capital, invested in more than 100 companies across 6 funds including Hotmail, Pandora, and RocketFuel. Foote began his venture career at Scripps Ventures, the Corporate Venture Capital arm of the E.W. Scripps corporation.

Before venture investing, Foote was a management consultant with Boston Consulting Group in a wide range of industries such as telecom, computers, healthcare, banking, and automotive on topics ranging from strategic alliances to internet strategies. Foote was a systems engineer for AT&T Bell Laboratories, developing artificial intelligence systems for testing the most complicated telecommunications networks.

Foote is on the professional faculty of University of California’s Haas School of Business teaching venture capital and private equity since 2000. He has taught impact investing at Stanford University and at Haas with a real-time simulcast to up to 100 business school campuses around the country. He has published multiple cases on venture capital and microfinance.