The Ladder of Abstraction 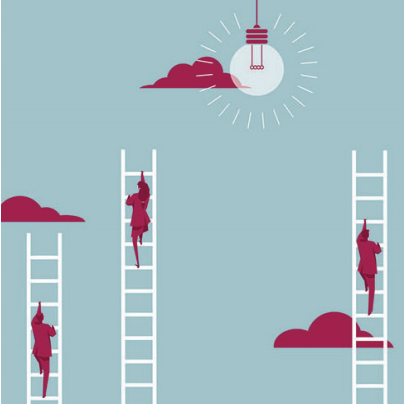 The CEO steps onto the stage. It’s an all-hands meeting of a billion-dollar company -- there are 3,000 people in the auditorium, and another 5,000 remoting in. The company’s gone through a difficult transition, and the CEO is here to talk about the upcoming reorganization. “The re-org is going to be great for us,” the CEO says. “It’s going to bring us back to our core values.” For the next half hour, the CEO describes the core values and large vision for the company.

This presentation was not received well.

Here’s another true story. At a large software company that builds customer management systems, the IT team developed a way to tweak existing code to achieve 35% better efficiency in operations. This resulted in a significant surge in their division’s profits, and the head of IT was invited to present at the next board meeting. In the boardroom, the head of IT detailed how they had adjusted Python script, developed a new algorithm, and even wrote out some of their signature achievements on the whiteboard. Until the board president called a halt and asked everyone to move on with the agenda.

Another presentation down in flames.

THE LADDER OF ABSTRACTION

In the first instance, when the CEO was talking about a re-org, the audience didn’t really care about a large vision. They wanted to know if some of them were going to be fired, and what would happen next. In the second instance, the board wanted to know about sales and growth; they didn’t really care about how IT had tweaked Python. They probably thought Python was a snake.

These two examples, drawn (with a few changed details) from clients with whom we have worked, illustrate a fundamental problem of communication: if you’re not talking at the right level of abstraction for your audience, you’re not communicating well.

Fortunately, there is a solution to this problem, a solution that is easy to adopt and will give you the tools you need to talk with any audience at any time at just the right level of detail. A solution that will turn you into an information acrobat, able to adjust nimbly to whatever comes your way. The solution is called the Ladder of Abstraction, and it was developed in 1939 by semanticist S. I. Hayakawa. Hayakawa’s parents had emigrated from Japan to Canada, and Hayakawa himself moved from Canada to the United States after graduate school. His diverse cultural background led him to be fascinated by how people create meaning out of language, and he had a significant insight: we absorb information at different levels of abstraction all at the same time.

To view the full Ladder of Abstraction article, click here.