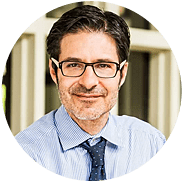 Toby E. Stuart is the Helzel Chair in Entrepreneurship, Strategy and Innovation and the Faculty Director of the Lester Center for Entrepreneurship. Previously, he taught at Harvard Business School, Columbia Business School, and the University of Chicago Booth School of Business, where he received his first chaired, full professorship at the age of 32.

Stuart is the recipient of the 2007 Kauffman Prize Medal for Distinguished Research in Entrepreneurship, which is granted every other year to recognize one individual’s contributions to entrepreneurship research. He has received teaching awards at Columbia Business School and Berkeley Haas. He has won the Administrative Science Quarterly’s Scholarly Contribution (best paper) award, and other recognitions for scholarly contributions. He is a Research Fellow at Oxford University’s Center for Corporate Reputation.

Much of Stuart’s research has examined social networks, particularly their role in entrepreneurship, innovation, and strategy. In some of his current projects, he is investigating email networks and employment outcomes in a variety of companies; the referral network among doctors in the U.S. healthcare system; matching in a few online networks; and the collaboration network in the academic life sciences.

At Harvard and Columbia, he served as course head for Entrepreneurship and Strategy Formulation, respectively. He has taught MBA and executive courses in corporate strategy, mergers and acquisitions, innovation and technology strategy, leadership, venture capital and private equity, and entrepreneurship. He launched and remains Co-director of the Executive Program in Corporate Strategy at the University of Chicago Booth School of Business. He is also the Founding Faculty Director of the Program on Competitive Strategy and Innovation at Berkeley Haas; and he has Co-directed Harvard Business School’s Creating Corporate-Level Advantage Strategy Program for senior executives. He has served as a consultant or executive educator at dozens of companies around the world. Currently, he is a member of the board of directors of HNTB Holdings and also advises a number of startups. He is on the Advisory Boards of ShanghaiTech School of Entrepreneurship and Management, PhilDev and Skydeck, a startup incubator at UC Berkeley.

Does Intra-household Contagion Cause an Increase in Prescription Opioid Use?

Status Spillovers: The Effect of Status- conferring Prizes on the Allocation of Attention

The Matthew Effect and Lucan Lawyer: Outlining an Ecological Approach to Status Research.

Does Intra-household Contagion Cause an Increase in Prescription Opioid Use?

Status Spillovers: The Effect of Status- conferring Prizes on the Allocation of Attention

The Matthew Effect and Lucan Lawyer: Outlining an Ecological Approach to Status Research.