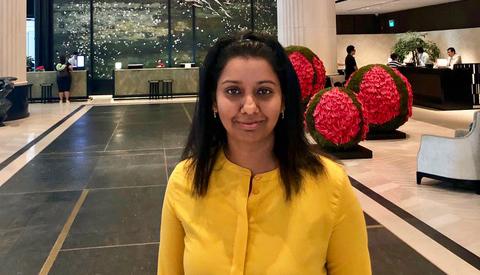 Big Data, Big Influence: One Woman at a Time

As a young girl in India, Radhika Rangarajan dreamed of being a teacher, just like her aunts and her mother. They modeled being capable, smart and strong females, each one making a difference in the lives of others.

Becoming an engineer didn’t cross her mind until her older sister went off to study engineering in college. The possibility of working in math and science piqued her interest. “I had a great deal of aptitude in those subjects; I really enjoyed both math and science,” she says. “It got me thinking that I, like my sister, could become an engineer.”

After completing an undergraduate degree in India, and a Master’s degree in the U.S., Radhika landed her first job at Intel, and held multiple roles in her 20-year career with the organization. In her final role at Intel, before moving to her current position at VMware, she worked in Intel’s Open Source Big Data team. At the time, big data was becoming part of a national conversation.

“I wanted to work in big data to see how it could impact manufacturing. It was the same time that conversations about diversity in technology were taking place,” she says. Tech companies were pledging an allegiance to diversity, and Intel was ahead of the curve and leading the cause.

“I looked around and realized, there was a noticeable gender diversity gap in the teams working on big data analytics.”

Radhika, along with her manager and the Marketing Director for their organization approached their VP, Michael Green, to get his perspective about diversity at Intel. He acknowledged there was room for improvement, and suggested they talk to peers outside of the organization to see what others were experiencing. Together, they rallied 15 peers from their network, and in June 2015, they all sat down in a small conference room at Intel to swap stories about their career paths as women in technology. They discovered one common denominator: women working in big data were very much in the minority.

The field of big data presents hurdles for women. It is male-dominated and too often women are not encouraged to pursue the technical classes and degrees needed for fulfilling careers in the field. In addition, many companies don’t realize that they can be more successful and profitable with a diverse workforce.

Passionate about changing this dynamic, Radhika and her peers formed a small organization called Women in Big Data. “We wanted to offer technical training to help women break into big data, and grow careers in this field,” she says. “We created a mentor matching program, formed committees and launched a Meetup group to get the word out within Intel – and to other local tech companies – that trainings were available for female employees on how to break into big data.”

The first workshop attracted 50 participants, the next one attracted more, and the group was off and running.

The forum now has chapters in South Africa, Australia and Canada, and has spread across Europe. In 2019 alone, the Toronto and South Africa chapters became official non-profit legal entities and more than 30 workshops/events were held worldwide across multiple chapters for the 15,000-plus members.

“This is, by far, the most important work of my career,” says Radhika. Serving as co-founder, Radhika is also part of the executive committee and oversees the Women in Big Data Bay Area Meetup, one of the largest Women in Tech Meetup groups in the area (2,900 people attend).

What’s Next for Women in Big Data?

The Women in Big Data Forum will continue to champion the success of women in big data and strengthen diversity in the field. As part of the initiative, the goal is to attract more female talent to the big data and analytics field and help them connect, engage and grow. The fundamental tenant of the forum’s effort is simple: each one, teach one. Each woman helps the next woman who comes along.

“I’ve been in situations where the prevalent mode is, ‘my way or the highway.’ I believe it’s possible to authentically share a difference of opinion or approach without judgment of another. Differing points of view are beneficial. In technology, this plays out in privacy issues and in artificial intelligence. These topics are charged, but that doesn’t mean it has to be one camp versus the other camp. … Let’s be respectful and truly inclusive of each other. Let’s go beyond diversity of race and gender to diversity of ideas and inclusion of thought,” she says.

Be Willing to Speak Up and Stick Out

Being vocal about controversial topics didn’t come easy for Radhika. As a college student pursuing her Master’s degree and new to the U.S., she was one of only a handful of women in the engineering department. She craved fitting in and tried hard to blend in with those around her.

“If I could go back and tell my younger self something, it would be not to try so hard to fit in, that I belong because I earned it. As a minority, sometimes, you try hard to fit in with everyone around you, and I put a lot of self-imposed pressure to fit in. I’ve learned that being my authentic self and speaking up is the biggest gift I can give to my community. Speak up, stick out, it’s fine!” she says.

“… being my authentic self is the biggest gift I can give to my community.”

Radhika offers simple advice to other women advancing in their careers or seeking leadership roles: Find your passion. “I wear my passion on my sleeve – and I tell others to find their passion and run with it,” she says. Inspired by a quote she saw on the office door of her daughter’s piano teacher, Radhika refers to it regularly. Ludwig Van Beethoven said it best,

“To play a wrong note is insignificant; to play without passion is inexcusable.”

“I tell my kids this all the time, ‘find your passion.’ Passion is self-healing. It is self-serving and regenerating. If you find your passion, you tap energy to aspire for more, and also to inspire others around you. Passion is one of the leadership tenets to help get others on board with a vision. Obviously, you need to back that passion with a lot of effort, but passion is the fuel for the fire!”

During Radhika’s participation in UC Berkeley Executive Education’s High Impact Leadership program, a professor helped her see that her passion is a core attribute of her nature and something she should harness, and never, ever damper. “He told me that if I ever found myself in a work situation where I was being told to dial back my passion, to quit that job immediately. That made a profound impact on me,” she says.

While attending another Exec Ed program, Women’s Executive Leadership Radhika was moved by guest speaker Haben Girma, the first deafblind Harvard Law graduate, now a professor and disability rights attorney in Berkeley. Haben’s passion and life mission for inclusiveness inspired Radhika to purchase numerous copies of her memoir, Haben, and distribute them to her daughter and her sixth-grade girlfriends. “Haben is a great role model for my daughters, aged 8 and 12. Haben is inspiring a new generation of women leaders,” she says.

Along with Haben, Radhika looks up to Michelle Obama and is appreciating the Audible version of her book, Becoming. Adding lightly, “I know this is political, but I also look up to Nancy Pelosi – she’s an amazing leader. I’m a huge fan!”

Leaving the World a Better Place

“We all get to a point when we think about legacy and wonder how we will be remembered. I may not have invented the next new thing, but if I have given something back to others through my work – if I have connected with others empathically and in a meaningful and purposeful manner – then I have moved the needle in the right direction,” she says.

“… if I have connected with others empathically and in a meaningful and purposeful manner – then I have moved the needle in the right direction.”

As Radhika continues to energize the Women in Big Data Forum to help make significant improvements in the lives of women around the globe, there’s no denying that she is a teacher at heart. Like her mother and her aunts before her, she embodies strength, intelligence and fortitude, and brings out the best in others through her own authentic expression and passion.

A quote by Robert Frost best illuminates Radhika’s unique way in the world: “I am not a teacher, but an awakener.”

The High Impact Leadership program is an opportunity to develop your personal expression and establish your authentic voice, presence, and talents as a leader who leaves a lasting impression.